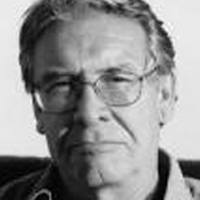 A graphic designer and lettering artist from the start, Thomas Lincoln’s long and illustrious career has spanned both coasts of the US. Starting with his education on the west coast, Lincoln studied with Douglas Lynch at the Museum Art School in Portland and later apprenticed with Lynch, whom he credits as his formative influence. In addition to graphic design and fine arts , Lincoln studied calligraphy with Lloyd Reynolds and Arnold Bank at Reed College.

After a stint as an agency art director producing national ads for Pendleton’s women’s fashions, Lincoln moved to New York City, where he joined the studio of Herb Lubalin. In NYC he continued his involvement with academia, exploring film at The New School and an intensive workshop with Milton Glaser. Eventually Lincoln started his own studio (occupying the space on east 32nd Street where New York Magazine was born), combining a design practice with teaching at New York’s School of Visual Arts.

Lincoln has served as Art Director at TCA (Benton & Bowles) in Westport, CT, as Creative Director, Redington, Inc., Stamford, CT, as Principal, Thomas Lincoln Design & Motion Graphics Communication, Westport, CT, as Freelance in residence Art Director, Baden & Co., Eugene, OR, and in 1992 returned to consulting and design through his own design office, Lincoln Design, based in Eugene/Springfield, OR.

In 1965, at the young age of 26, Lincoln was a winner in the first Visual Graphics Corporation (VGC) National Typeface Competition for his typeface, Lincoln Gothic. In 1972, he was awarded a Gold Medal, Best of Show, Boston Art Director’s Club for his masthead design of the Boston Herald Traveler Magazine, and in 1973 was given an Award of Merit, Typomundos Internationale, Paris, France for a promotional brochure. His design work has subsequently appeared in seven books on corporate design.

In his leisure time Lincoln enjoys fly fishing and has recently turned his artistic ability to sculpture.